Part of this story takes place before Tokyo Police Club ever take the stage on this night. First of all, the band last played in Dallas on February 1, 2011. I was so ready to see them then play their newest album, ‘CHAMP’. I had already bought tickets for a friend and me. My friend’s babysitter was even lined up. Nothing was going to keep us from seeing this show. Until Mother Nature stepped in with a bizarre ice storm that covered the roads from us to Dallas. The three hour trip would be very dangerous at best. Friends in Dallas told us not to risk it. We would have to risk accidents and even getting stranded, so I made the gut-wrenching decision to not go. ‘CHAMP’ is quite possibly my favorite album of the last 4 years. And the band seemed to take forever to put out the new album, “Forcefield”. So the wait for this show was agonizing. But it was finally here. 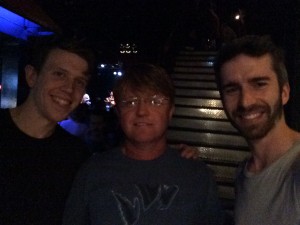 with half of Tokyo Police Club

As I arrived at the venue, I noticed that Josh Hook (guitarist) was sitting at the merchandise table. I stood back for a while as other fans talked to him and took pictures. Later, I saw Dave Monks (vocals & bass) walk by a few times. I just observed how Josh and Dave were very appreciative and accommodating of the fans. So I finally decided to talk to Josh. He could not have been nicer or more thankful for the support fans give them. He introduced himself with a handshake, and we chatted about the infamous ice storm, song remixes, and the band’s participation with RAC (check out “Tourist”). Dave and Josh were nice enough to take a pic with me. They seem to enjoy talking and posing with fans. That’s a far cry from a lot of bands. I even talked to Josh about a bundle I had ordered from a band sponsored project on pledgemusic.com that seemed to be delayed. He asked for my information and immediately sent an email to find out more about the delay. I received an email the next day that my bundle had shipped. (coincidence? or Josh?) Opening support came from Said the Whale and Geographer. But, it was finally time for the headliner.

They opened with the epic “Argentina Pts. I, II, III”. They played all the best songs off their three albums. But the biggest cheers on the night may have come from the songs off their debut EP. I think the crowd was thoroughly surprised and pleased to hear “Nature of the Experiment” and “Cheer It On”, especially. I only remember one other show where the crowd sang word for word with the band. That was for the Refreshments, at the same venue, many years ago. These fans love Tokyo Police Club. The crowd knows the words to every song. They did a stripped down version of “Juno”, segued into “Wait Up (Boots of Danger)” with Dave leading an extended version of the song with a crowd sing-a-long. I am not sure I could pick out a favorite of the night, as I truly love every song they played. There were no duds in this setlist. They write such perfectly memorable songs. New songs, “Miserable” and “Toy Guns”, were highlights. And the crowd sang along so loudly on “Favorite Colour” that it only added to the greatness. 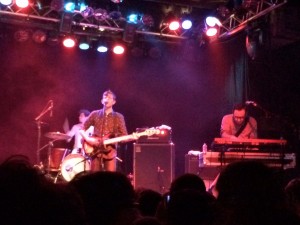 The encore started with Dave coming out alone. He told the crowd he was going to do a song with no help from an amp or microphone. Just his voice and an acoustic guitar. But everyone HAD to be quiet. After he waited for a few ‘chatties’ at the bar, he sat at the front of the stage and did his extremely solo version of the excellent “Tessellate”. It’s one of their songs that the crowd would want to hear amped up with the full band. But there is no way anyone would complain about what they were witnessing. All I could think was that not many singers at all would do what he was doing. This was the one time that I wished the crowd had shut up and not try to sing with him. But it was excellent nonetheless. “Favorite Food” and a rousing “Your English is Good” closed out the set.

According to my count, they cruised through 21 songs. (I may have missed one. I get too caught up in listening to keep track). Their songs are not overly long. (except “Argentina”, but it’s a 3-part song). And their songs are insanely catchy. Graham Wright was multi-tasking, playing keyboards one minute, then guitar the next. And Greg Alsop kept the pace up with the drumming. Josh quietly went about his business of supplying the jaunty riffs that made everyone want pogo up and down. Dave is a great frontman. These guys write and play awesome songs. They proved that they are also nice guys. And these nice guys do deserve all the success in front of them. I just hope I don’t have to wait three years to see them again. 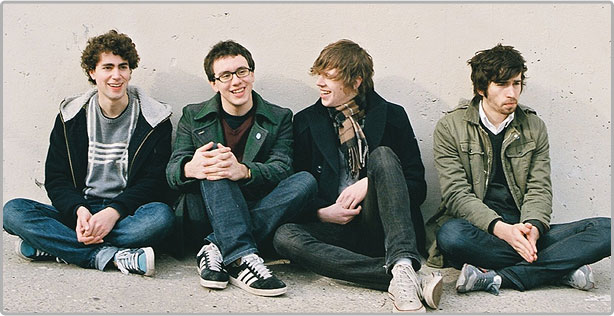