First of all, full disclosure…I LOVE this band.  I have listened to them since their debut album in 1989.  Their videos for “Between Something and Nothing” and “Drifting, Falling” announced them to the world on Mtv’s 120 Minutes.  The next album, CERULEAN, brought one of their most beloved songs, “Ballerina Out of Control.” (video above)  Their first five albums came out over about a ten year period.  But then it was about five years until the WATERWORKS E.P. was released.  Then we really weren’t sure what was going on with the band.  No new music.  Singer/songwriter, David Schelzel, even turned to working as an attorney.  But then in 2013, after about nine years, The Ocean Blue was back with the magnificent single “Sad Night, Where is Morning?” and the album, ULTRAMARINE.  Now the band are promoting their 2019 album, KINGS AND QUEENS / KNAVES AND THIEVES.  As soon as this show was announced, we bought our tickets.  Somehow, this would be my first Ocean Blue concert.  I promised nothing would keep me from being at this show. 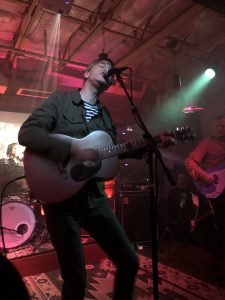 So we arrived at the venue early to grab a bite to eat.  We heard music and realized the band were still soundchecking.  So, of course, we went on in to be seated and were able to watch the band run through parts of a few songs.  As the band was departing, we caught David for a quick chat and photo.  Later on, we also caught bassist, Bobby Mittan, at the merch table for another chat and photo.  Both were very  pleasant and looking forward to giving everyone a good show.  Before the opening band, MOTORCADE, even took the stage, people were getting in place for The Ocean Blue.  So we went ahead and grabbed our spot up front and center.  MOTORCADE was an impressive sounding opener.  I really like “Recover.”  Then on with the main show.  “All the Way Blue” set the perfect tone.  Then they knocked out two of their best singles, “Ballerina Out of Control” and “Sad Night, Where is Morning?”.   There are no self indulgent theatrics to the show, which is perfect.  David is really the only animated one.  Everyone just goes about their business playing one good song, then the next.  Oed Ronne, guitarist/keyboardist, took his turn on lead vocals for “Ticket to Wyoming.”  He just plays like a serious musician, chewing his gum.  But we did get a kick out of his engineer hat resting atop his head.  Bobby looked happy supplying bass lines.  And drummer, Peter Anderson, played in front of a screen showing cool images or even some of the band’s old videos.

I thought “Cerulean” received a particularly big response as the opening notes started.  It is, after all, the song that contains the lyric “it’s always ocean blue.”  And it has always been one of my favorites.  I loved the jaunty new songs “It Takes So Long” and “Paraguay, My Love.”  They mixed in eight songs off the new album. Of course, everyone loves “Mercury” and “Sublime.”  And a Smiths cover always goes over well.  For a concert, I typically prefer more upbeat songs, but I was very happy and surprised to see them open the encore set with “Frozen.”  (video below)  I adore this song.  Then “Between Something and Nothing” had everyone bouncing again.  They finished with the Joy Division standard “Love Will Tear Us Apart.”

After the show, the band stayed around and talked to fans.  You could tell how much it meant to everyone to see this band.  I am certain the band members heard stories about how people came to love The Ocean Blue and what the band means to them.  I hope the band enjoyed it all as much as we did.  It would have taken two more hours to squeeze in all the songs of theirs that I love.  We even got to take a pic with Oed after the show.  I am sure there are fans that have not really followed the band since the first two or three albums.  If you are one of those, you are missing out.  Each album has at least five or six songs that would easily fit on a ‘best of’ playlist.  It’s easy to catch up.  Go to their website and buy some vinyl or a CD or a shirt. (band and record label link listed below)

David has also been involved with a musical project called 5 Billion in Diamonds.  It includes the music producer and Garbage drummer, Butch Vig.  Their song, “Better If” could definitely be an Ocean Blue song.  I know David’s legal work kept him close to the music industry working with trademarks and copyrights.  He was even a city attorney.  I am certain he is an excellent attorney, but I am pretty sure I speak for a lot of people when I say we hope The Ocean Blue is a full time thing again.  And we heard speculation about more tour dates in 2020.  So I hope my second Ocean Blue concert is very soon. 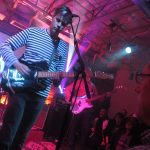 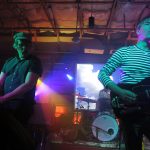 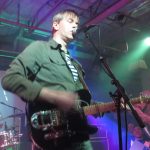 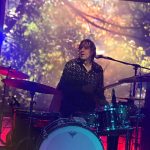 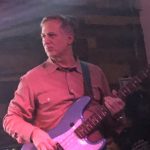 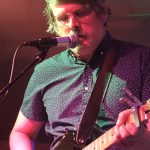