I want to say thank you to Richard Blade for using my suggested theme and playlist on XM’s FIRST WAVE (Ch. 33).  Every Thursday, Richard does a “Theme of the Week” segment.  I listen to XM a lot using their app.  I heard last week’s episode and thought I would give it a try.  I got the idea of “message” as a theme and quickly came up with my five song list.  I even added another good song later.  But I had not really thought about it since.  I did not even see the tweet from Richard telling me he would use my idea until after the show.  Obviously, I have not stayed current on twitter.  I just happened to be listening to his show when he announced the Thursday Theme segment was coming up soon and “message” would be the theme.  I jumped up and said “that is mine” and tried to figure out how to record it.  A video playing his intro is on here.  He gave me a shout out and gave out my twitter handle at the beginning and end of the segment.  If you already have the XM app, you can listen to the whole “Theme of the Week” segment on demand.  XM is actually free to everyone until May 15, so check it out.  I intentionally cut the part where Richard was about to announce the “most obvious” of the five songs.  I wanted everyone to have to listen to the whole thing to find out, but I will list them here anyway.  So this was definitely my excitement for the day. 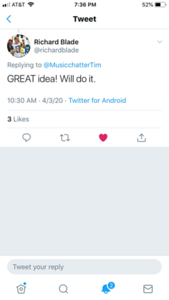 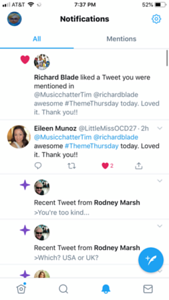